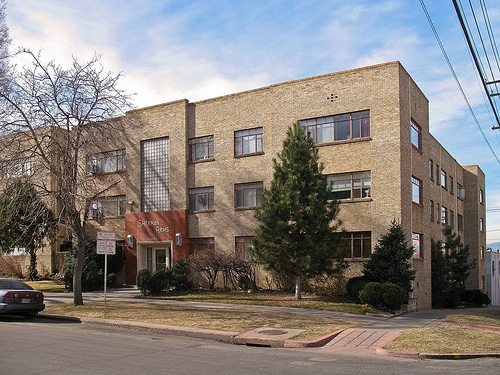 Poet’s Row is a concentrated, Capitol Hill, historic district of apartment buildings built with elements of Art Deco, Streamline Modern & International Style, all on one short block. Most of the buildings were designed by an architect responsible for much of Denver’s modernist character, Charles Strong.

Charles Strong‘s buildings are abundant throughout Denver. His most prominent local building is the 1957 Miesian-style glass and aluminum skyscraper, the Petroleum Club Building. 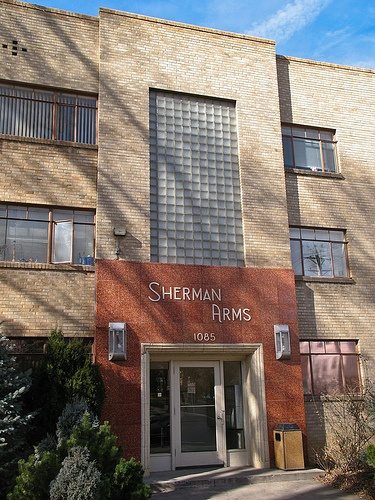 We’ll start at 11th & Sherman, heading east in the opposite order of when these were built.

The International Style Sherman Arms Apartments building was built in 1950 and is just assumed to have been by Charles Strong, as the style of the building and use of Art Deco glass brick match the rest of the structures he built on this street… 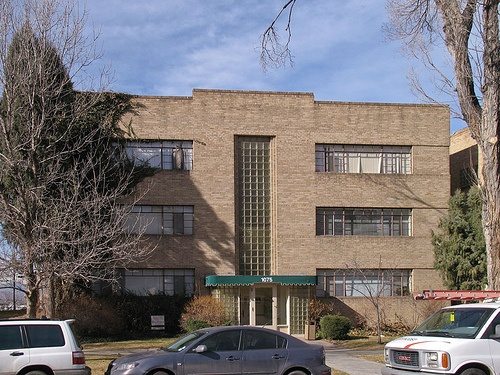 …as you can see in this next building, the 1942 World War II-era Panama Apartments. It is also a mixture of Art Deco and International Style and is definitely designed by Charles Strong. 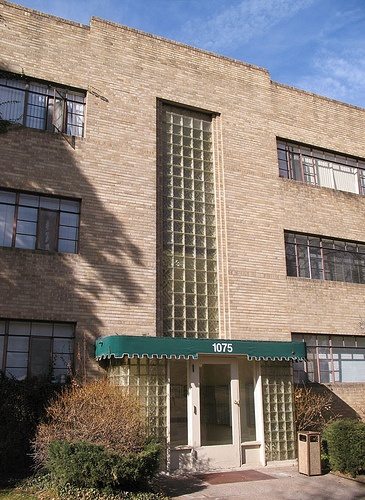 You can see the distinctive use of glass brick by Strong. 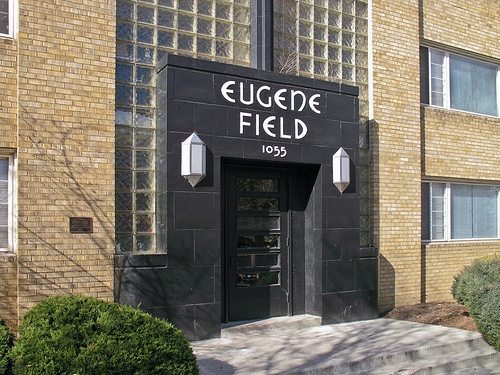 The Eugene Field Apartments were designed by Charles Strong in 1939. Another feature that many of these buildings share is the Art Deco stepped-brick spire. 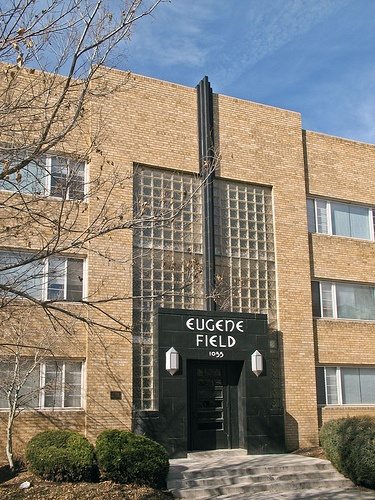 Eugene Field is a famous St. Louis poet and essay writer. He also worked for the
Denver Tribune for two years! 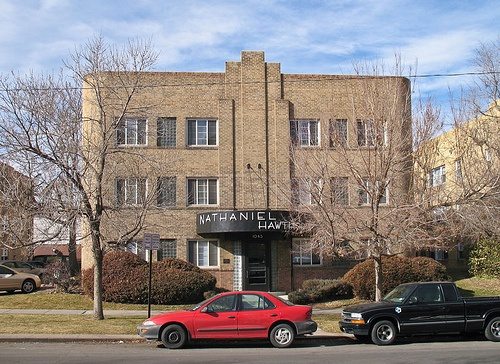 Next we reach the Nathaniel Hawthorne Apartments building, which resembles a film theater with it’s vertical Art Deco movie-marquee entranceway. Named after the famous author of The Scarlet Letter, the building was designed 1938 by Charles Strong. 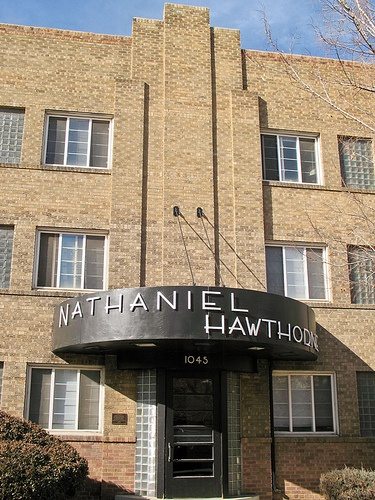 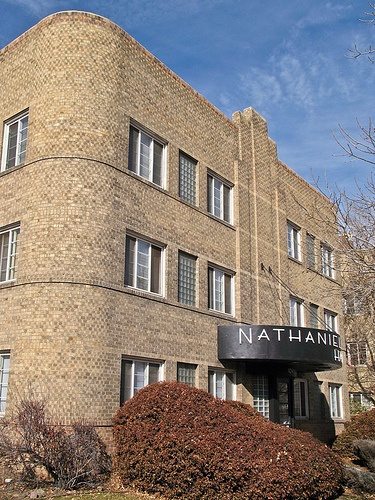 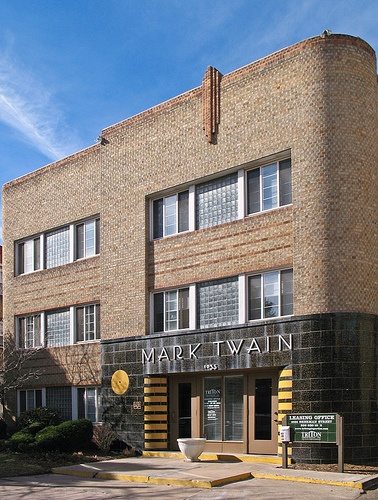 Strong had used Moderne radial corners and a similar use of Art Deco glass brick the year before in the design of the Mark Twain Apartments in 1937. Here again is the stepped-brick spire. 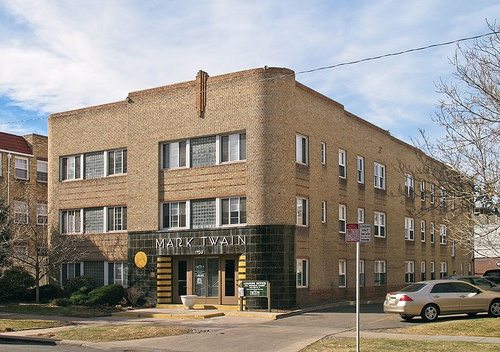 Twain, arguably America’s most famous writer, also had a streamline modern Burlington Zephyr route named after him that traveled from Burlington, Iowa down to St. Louis. Here is a borrowed photo of that Zephyr: 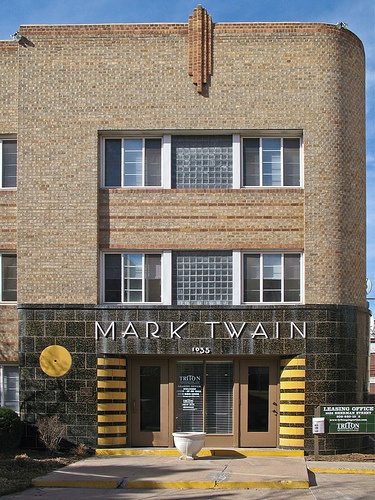 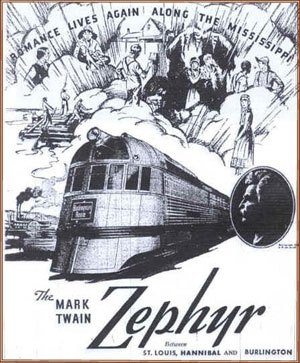 The entranceway is notable for it’s high glaze ceramic brick.

The Robert Frost Apartments were not by Charles Strong. They were designed by Andrew B. Wilson in a 1929 version of Spanish-Colonial style and the building was original called the Casa Bonita! The name was changed to Robert Frost in the ’30s. 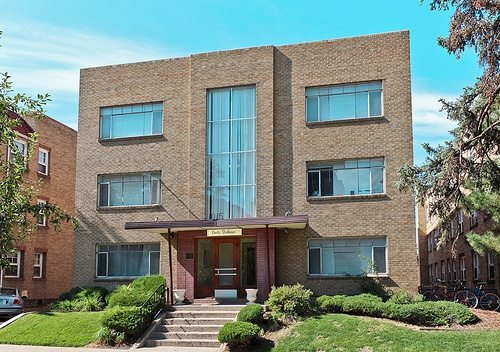 The 1956 Emily Dickinson Apartments building was originally called The Constellation and was designed in a hip, yet spare ’50s version of the International Style, making this the most contemporary member of Poet’s Row. 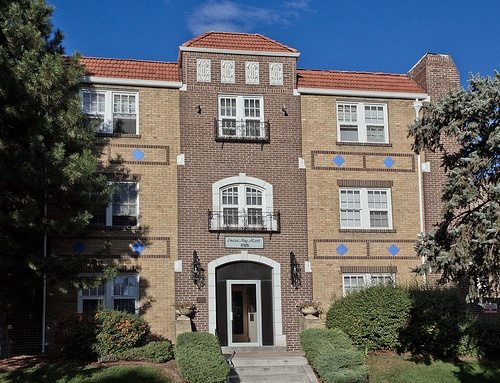 And as we reach the corner of 10th and Sherman we come upon the twin of the Robert Frost, the Louisa May Alcott apartments. It was built 2 years later in 1931 and is almost exactly the same Spanish-Colonial design by Andrew B. Wilson. It was originally called Casa La Vista. 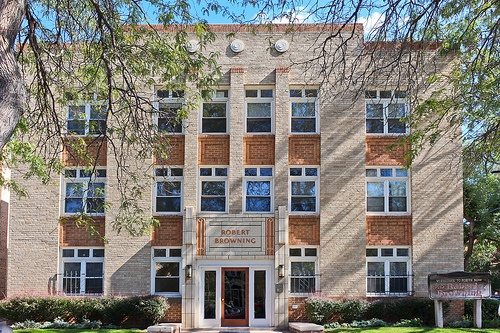 Crossing the street we reach the Robert Browning Apartments, named after the Victorian-era English poet. It was designed 1937 in the Art Deco style by Charles Strong.

The Art Deco buildings built on this east side of the street by Charles Strong have a different look than the ones on the west and do not make use of glass brick. 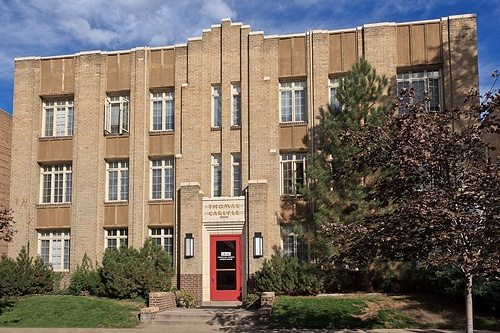 The Thomas Caryll Apartments were named after a Scottish satirist. They were designed in 1936 by Charles Strong. 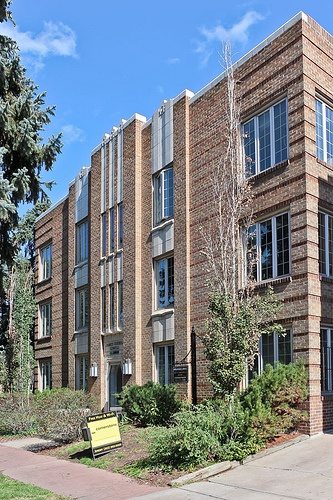 And finally the James Russell Lowell Apartments, named after a famous Fireside Poet and anti-slavery activist. They were built 1936 by the great modernist and poetry-lover Charles Strong.

(Some facts gleaned from this page: Sherman Street Historic District)