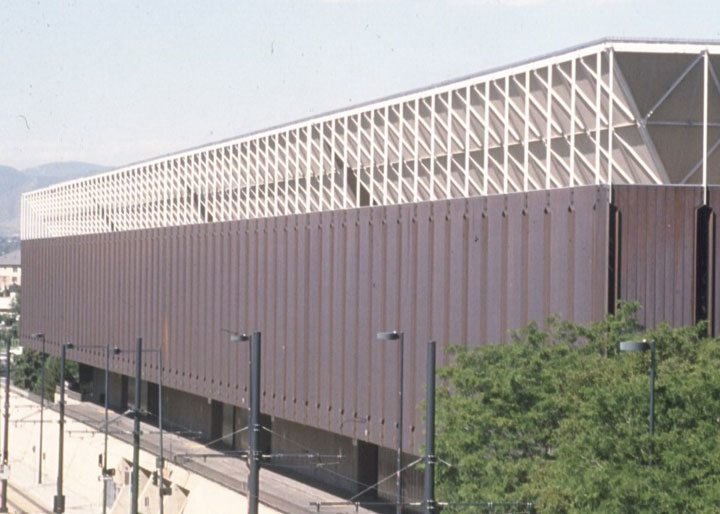 Currigan Exhibition Hall, a Brutalist structure completed in 1969 with the incredible use of the space frame, a steel-truss structure using triangular forms (and also, in this case upside-down pyramidal shapes) that gave it rigidity and strength to span large areas without interior support columns. This building was then clad with steel panels that self-sealed through rusting!

The City and County of Denver held a contest in 1965 for a convention center design that was won by William Muchow Associates and architect James Ream. Here is the full stellar lineup of parties involved:

The pyramids that raise and lower within the truss are specialized lighting features that could be adjusted over each module of display space. When not in use they were raised and nested back into the space frame trusses.

Denver’s Currigan Hall, a major new exhibition and convention center, is many things simultaneously; its architects have joined in joint venture to create a strong, clear, exceptionally handsome archictural expression, a bold simple structural solution, and a building that competes with the best of its field for the business which is its livelihood.

For Denver to have such a large and beautiful James Ream design in the center of the city for 30 years was quite fortunate, indeed. I know Ream has become one of Shannon’s favorite historic architects. Here are a few James Ream houses to marvel at: the Busch House, the Sorensen House and the Varner House.

Ream also used the space frame concept for this home on Shannon’s site, the Lipman House.