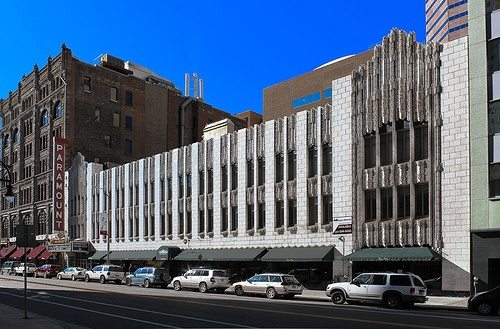 Designed in 1930 by Temple Buell, the opulent Art Deco Paramount Theatre is the last of the original downtown Denver movie palaces. 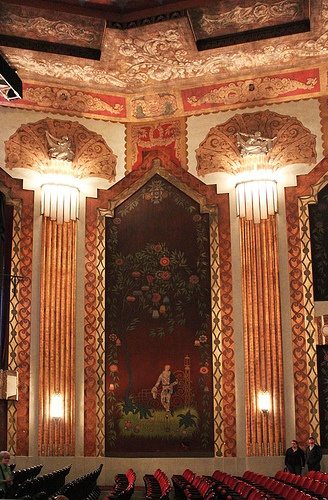 (Note, in this shot, you can even spot a Green Man a few feet above the tapestry.) 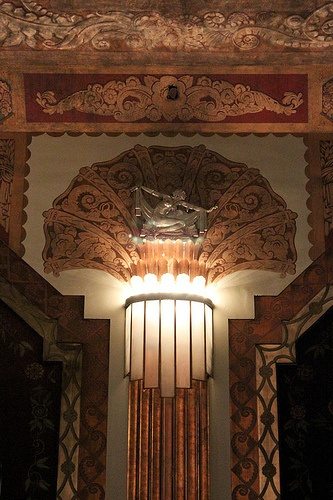 I was visiting here for Doors Open Denver 2012. 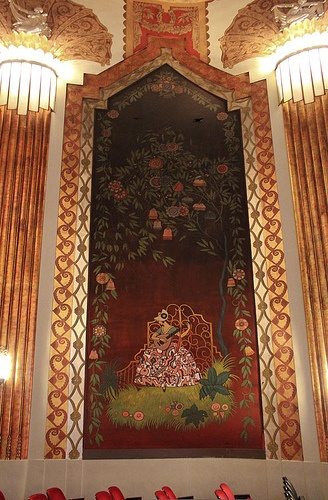 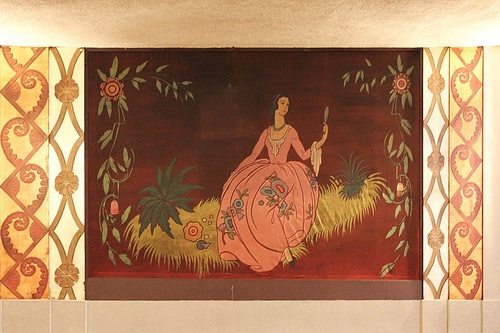 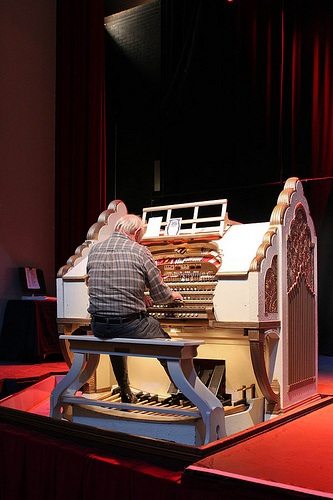 The theater currently houses twin-consoles for a Wurlitzer Organ which raise up out of the theater floor. This organ was intended to accompany films of the silent era, but this period ended not long after the theater was completed. 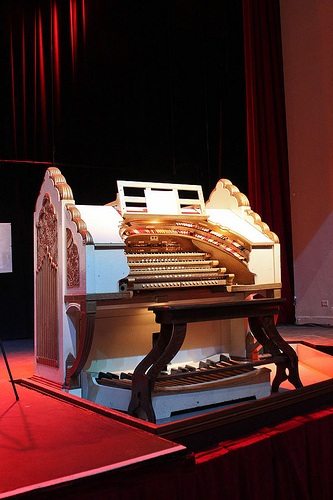 I am going to borrow an incredibly detailed comment to my other website to describe this organ:

“One notable thing about the Paramount Wurlitzer is that it isn’t really quite like Radio City. The latter can be said to have TWO organs – there are two consoles with separate relays (controls), and both operate independently. This was the only Wurlitzer – the only theatre organ of any brand – ever built with two master consoles, both in a magnificent Streamline Moderne style (Wurlitzer only built five Streamline consoles – not their rarest or most unusual console design, but close).

The Denver Paramount is one of the few remaining of ten Wurlitzer installations using two consoles with only one relay. The second console, on the right in this installation, is a slave to the first. What does this mean? The stop tabs are all dummies, and the stops chosen at the main console work on the slave at the same time. If the master’s lowest keyboard currently is set to play a trumpet, the slave’s lowest is also set to play the trumpet. The slave can only change stops using the thumb pistons beneath each manual, but these mirror the main’s pistons. How can you tell which is the slave? Most slave consoles were simpler in design in some fashion – sprayed-on decoration instead of applied ornament, in the case of the Brooklyn Paramount with its French-style consoles. Those like this one, with the “Modernistic” (Wurlitzer’s term) or ‘waterfall’ console, used a three-manual console shell for the slave. The slave here also has a simpler bench.

Other signs: The master has two full horseshoes of tabs, two straight rails in back, and a partial curved rail on each side. The slave has what most three-manual consoles have: single back straight rail and no partials on the sides. The master has four pedals: three swell pedals (main, solo, and general) and one crescendo, plus a row of toe studs on the left and thunder/drumroll pedals on the right; the slave has nothing but a single general pedal. Last, the master has swell indicators; the slave doesn’t.

I’m not sure if any other master/slave Wurlitzers exist anywhere else any more; if they do, I can’t find mention of any offhand. In some cases, the slave consoles were sold off – the slave from the State Theatre in Melbourne now controls as a master at Australia’s Capri Theatre. A theatre in NYC had one just like this; it was taken to Salt Lake City and rebuilt into a 5-manual Modernistic console in a bizarre metallic purple finish, with five ranks of Robert Morton strings added, and is in a catered club called the Organ Loft.”
– Comment by Jonas 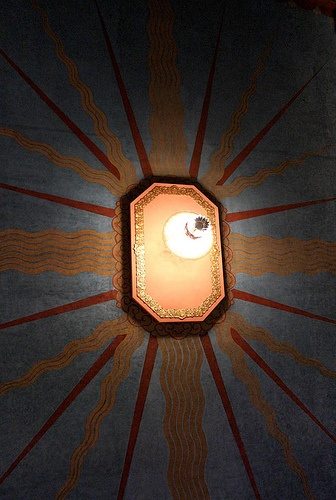 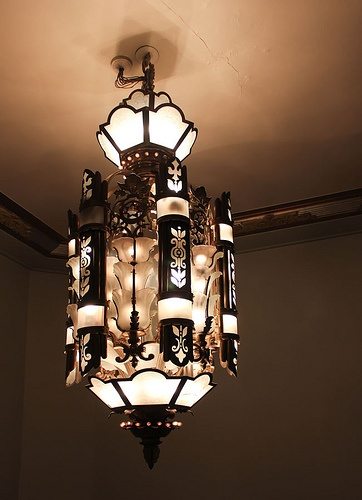 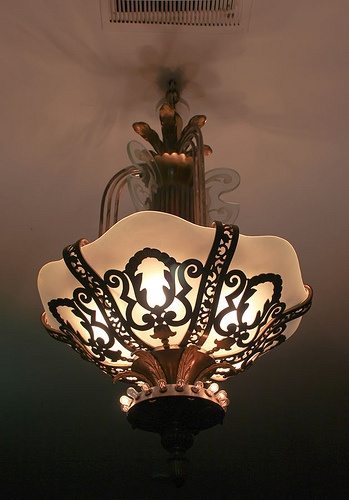 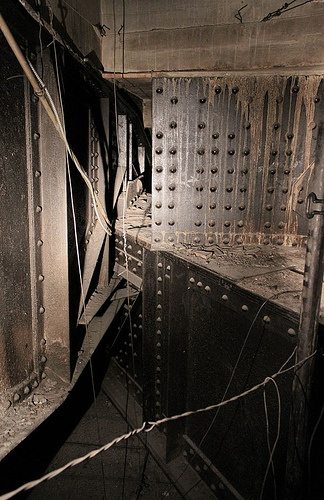 The steel work of the interior 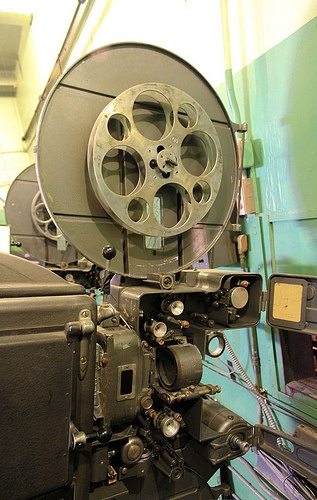 One of three projectors 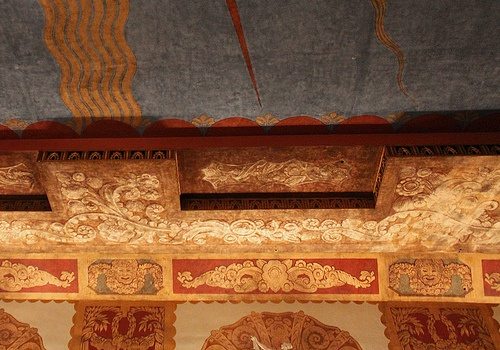 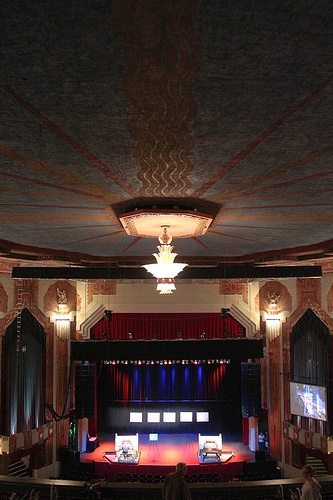 If you are ever in the Charlotte area, be sure to visit the Levine Center for the Arts – LevineCenterArts.org.