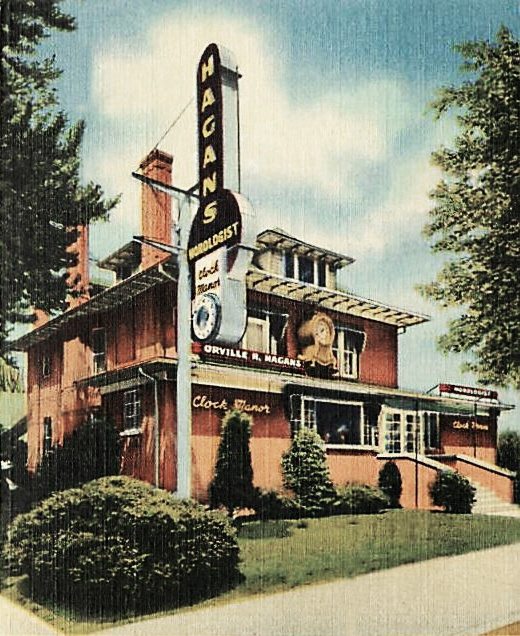 Orville Hagans was an horologist who started the American Academy, School of Horology here in Denver. He was also a writer, he edited the magazine American Horologist and Jewler (which is now called Horological Times).

In the 1950s he ran Clock Manor at 1901 East Colfax. Here is a description, no doubt written by Hagans himself:

Clock Manor houses one of the finest collections of clocks and watches, open to the public, in all of the world. Here is found a presentation of the Story of Time and the artistry of the clockmaker throughout the ages. This private collection has been assembled from the four corners of the world and is a fine exhibit of rare timepieces.

Later in the 1960’s Orville Hagans moved to Bergen Park in Evergreen and took Clock Manor with him. 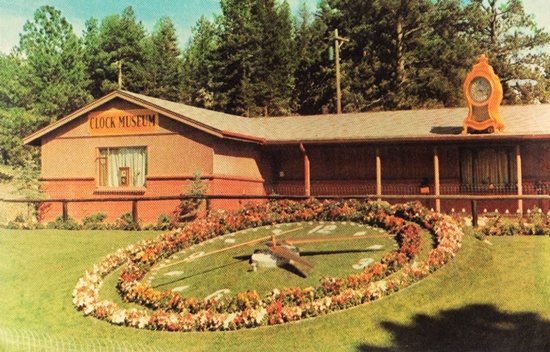 Hagans’ description of the museum:

The World’s Most Unique Foundation of Time in all its phases. The huge 22 ft. Floral Clock adorns the center of our spacious sloping lawn and is controlled by a Master Clock inside the Museum building.

I would make a bet that the similar Elitchs‘ floral clock was designed by Hagans, as well.

Congrats on finding out a tidbit more of information on this! I have not been able to find much on the internet about the Bergen Park location. While the Colfax locations seems to have bee demolished (there is a location on the other side of the street that ALMOST could be the place with an addition on the end, but I think its just a similar looking building, now a bed and breakfast) but I had hoped that the Bergen Park location still stands and would love to google map it if I could find it!

Also note that the big clock stuck to the outside of the Colfax location appears to be the same one finding a home on the roof of the BP location!